Vyatka Paleontological Museum carries out yearly research at the Kotelnich pareiasaur site. We make sure we promptly register and excavate skeleton remains out of the outcrop. Since 1992, paleontologists and geologists from over the world take part. 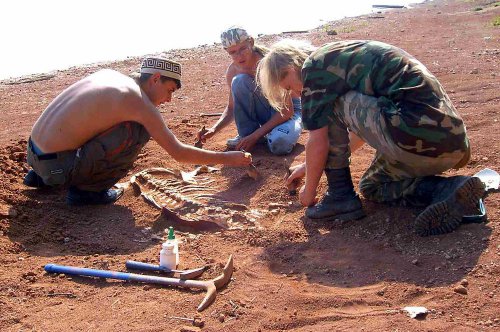 Field work begins in May or June, when spring floods are gone. Reconaissance then points to places of possible findings. These places are put on the map, while the fossils are covered with protective glue till their eventual excavation. Reconaissance takes many days, during which time the scope of further field work is being determined. The usual procedure is skipped in cases of extraodinarily valuable findings, which have to be taken right away using glue and alabaster cloth. Later on, a camp grows over the most fossil-populated spot. 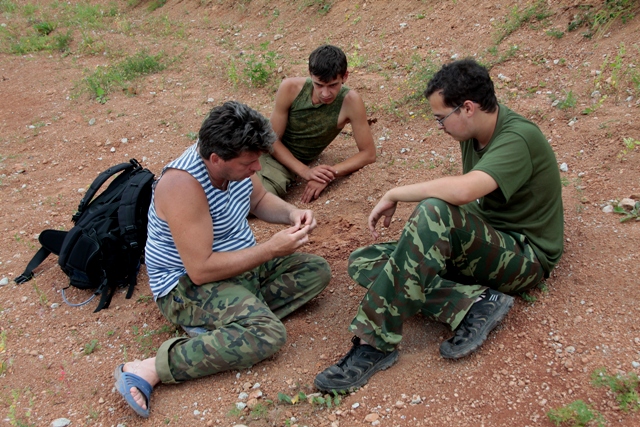 Unearthing of big findings, say a pareiasaur skeleton, is a long process taking 7 to 10 days. Ere excavation begins, observation of the spot is necessary to collect the fossil’s fragments that have been washed off it by ebbing water. Next step is to remove the upper layers of earth lest some of it fall on the newly-unearthed lump with bones, which is then to be cleared of unnecessary amounts of earth on top of it as well as beside and glued for protection. When the lump and the glue are thoroughly dry, it is time to disassemble the lump following its own cracks, assigning numbers to the pieces. These numbers correspond to those written in the fossil’s scheme, a blueprint for its subsequent putting together in the laboratory. Finding small animals, of Therocephalia for instance, is often tricky, that is why much time is invested into carefully watching out for their remains on the excavation spot every day while the work is being done. Sometime fossils are extremely fragile, sometime rains seem incessant, which forces the team to extract the whole lump that contains the bones. For safety’s sake it is put inside an alebastre capsule. 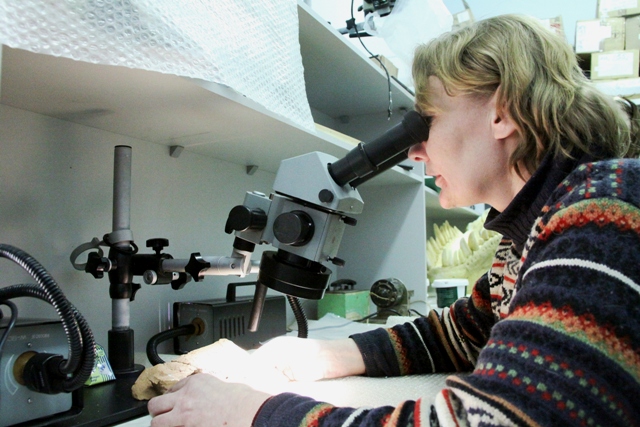 Unlike field works, the laboratory activities do go on throughout the year. The unearthed lumps are further pieced apart for the small pieces to be cleaned and put together again. The re-assembled skeleton is cleaned by different methods, including electric instruments, pneumatic cleaners. Further on we strengthen the bones with special substances. In most cases it appears advisable to leave bones partly sunk in the surrounding mineral, where they are accessible enough for study, taking casts and being exhibited. Skulls require a different approach since one wants to see all the details outside and inside.

Every specialist has his own recognisable style when working with fossils. In turn every unearthed object requires special care, which means that mistakes have no place whatsoever since damage will be most surely irreversible. No outsourcing has its place all the way through. 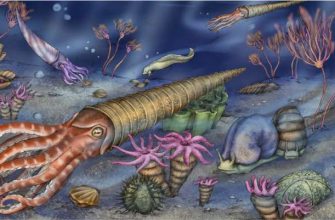