The Enigma Of Permian Period

This is the name of a travelling paleontological exhibition that shows the weird Permian Age, which, unlike the well-popularised dinosaurs, remains a mystery to all but researchers. In Russia it was Vladimir Prokhorovich Amalitskiy’s expedition in the end of the XIXth century nearby the town (town status since 1917) of Kotlas who first found Permian fossils. The Warsaw University expedition there found eleven full Scutosaurus karpinskii skeletons, two of Inostrancevia alexandri, sculls and skeletons of other animals now known as Amalitsky North Dvina fauna. 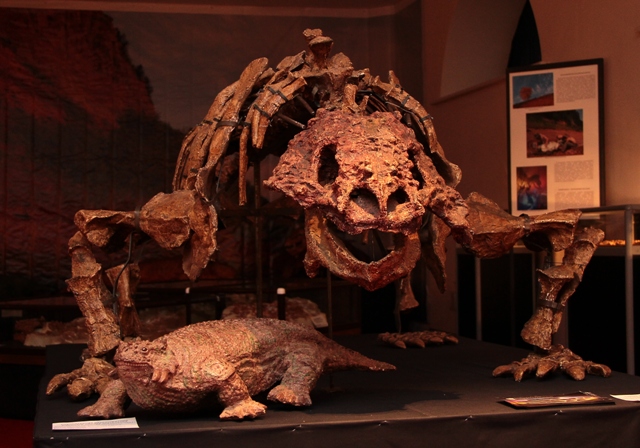 The exhibition has complete fossil replicas of the famous Scutosaur and Inostrancevia
skeletons found by Amalitsky’s group. The originals are 255 MYO.

The Kotelni’ch vertabrate fossils locality was discovered in 1933. But only toward the end of the 1900-th did the scientists realise its scale: one of the world’s biggest pareiasaur sites, over twenty ancient species, including some unique ones, some even standing on their feet in thick clay! These findings form the basis of the Museum’s collection.

Beside actual findings, there are in the Museum sculptural reconstructions of many extinct creatures that look so different to animals of our age. The younger visitors are encouraged to take part in a simulation of an excavation, to unearth a skeleton and tell the animal it belonged to, and what kind of life it had, what it lived on.

The Museum is delicately set to create an enigmatic atmosphere as the visitor dives into the world of beings long gone.